One of the goals of the European Kratom Alliance (EKA) is to ensure that responsible citizens have access to high standard, uncontaminated Kratom. The EKA considers this right to access traditional herbs as a basic human right for responsible citizens.

But with this right of access also comes the responsibility to inform yourself extensively before using Kratom. EKA will support scientific studies and independent public health information in the future.

Our first summary of scientific studies has its focus on the reasons, why Kratom is not endangering public health, but rather contributes substantially to improve public health. Especially as a natural tool of harm reduction for the millions of victims of the opiate epidemic. Just skip a chapter if you are familiar with its content.

2. Kratom science and the Opiate Epidemic

Kratom is not “New”, it is very old and used traditionally by millions of people throughout Asia, since millennia. Science confirmed such widespread traditional use early on, like Grewal et al 1932. But medicinal chemistry got interested even earlier, with Ellen Field, who isolated Kratoms main Alkaloid, Mitragynine, already in 1921 in the  University of Edinburgh. But 40 years of research failed to find a similar effective patentable synthetic analogue without the usual opiate side effects. So, a patent by SmithKline in 1963 could only get filed for a simple alkaloid extract with Mitragynine.  That patent admitted the strongly reduced side effects compared to western pain medications.

The properties of Mitragynine as an atypical Opioid has inspired 2 generations of pharmaceutical Scientists. But the real mechanism behind Kratoms low side effects was only discovered in 2016.

In 2016 Gavril Pasternak et al published a study showing that the oxidation product of Mitragynine, Mitragynine Pseudoindoxyl “and its analogs were potent agonists in [35S]GTPγS assays at the mu opioid receptor but failed to recruit β-arrestin-2, which is associated with opioid side effects. Additionally, 3 developed analgesic tolerance more slowly than morphine, showed limited physical dependence, respiratory depression, constipation, and displayed no reward or aversion in CPP/CPA assays, suggesting that analogs might represent a promising new generation of novel pain relievers.”

The holy grail of pharmaceutical pain research for 2 generations was discovered! Well, “Discovered” in a plant used since millennia by the people of Asia…for exactly the same purpose. Pain. Never mind…they patented it immediately for western medicine:

In the very same year, in 2016 Pasternak and his team filed a patent covering all possible attractive chemical analogues of Mitragynine and its Pseudoinoxyl. They filed it for the Rockefeller associated Memorial Sloan-Kettering Cancer Center with (MSCC)  Patent grant 11,046,692.

Not yet all reasons are known, why it took full 5 years to get the patent for mitragynine analogues officially granted by the US Patent office. But in June 2021 it got granted. Now, the mechanisms of western patent-based medicine can finally move on – to eliminate and replace Kratom as the only effective alternative to existing opiates.

The researchers of the MSCC knew about Kratoms superiority better than any other institution, their Patent confirms that. But until now, in 2021 its website still firmly recommends to avoid natural Kratom: “However, kratom cannot be used as a substitution for prescription pain medications, because studies on its safety or usefulness in humans have not been conducted. Its use is banned in some countries and US states due to potential for abuse. Moreover, some kratom products were recalled due to contamination“

These complex mechanisms to replace nature by patented chemicals are in place since Rockefeller founded the Pharmaceutical Medicine, as we know it today. Natural compounds got marginalized by synthetic patented substances because of their higher profit margins. In most cases nature lost. With a few important exemptions: When people got organized and rescued the traditionally used herb from these mechanisms.

This is just one of the reasons why a European Kratom Alliance was needed. Become a Member  + Send us a message if you want to support our cause

Read more: DSHEA: The 1990 Victory the US Natural Health Movement

Kratom science and the Opioid Epidemic

There is a tremendous cultural arrogance and despotism within the current attempt to schedule Kratom as narcotic – while preparing synthetic analogues as expensive medicines. Just imagine the uproar in the west, if a Chinese company abused its influence within the WHO to: ban Chamomile as a narcotic – because its active ingredient, apigenin – binds to benzodiazepine receptors in the brain (like the Tranquilizer Valium) – and launch a patented Chinese analogue of Apigenine as a pharmaceutical medicine. Only by prescription for 10times the price – Cynic? Discriminatory? Not more discriminatory than banning natural Kratom by the WHO for Asians and the people of the world – while investing into patented synthetic analogues of it as medicines by Rockefellers American Pharmaceutical interests.

Back to the Numbers: Below you can see the exponentially growing number of Scientific Studies, reviews and publications, while Kratom became popular in the US and Europe: 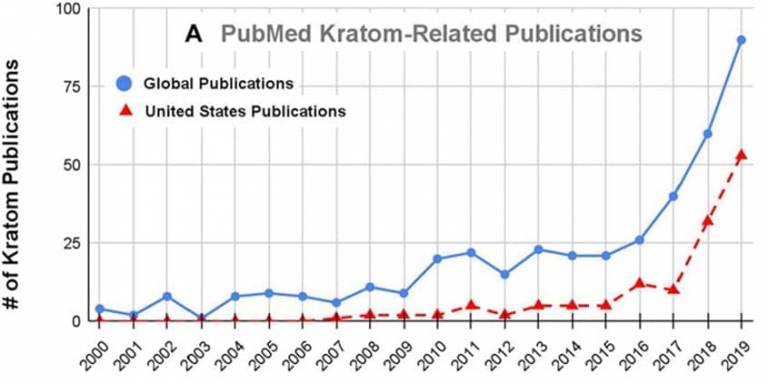 Public Interest in Kratom increased substantially with the opiate crisis in the USA. While the Media celebrated Corona exclusively, 100.000 Americans die every 12 Months from opiate pharmaceuticals, Heroin and Fentanyl Link CDC https://www.cdc.gov/nchs/nvss/vsrr/drug-overdose-data.htm

In opposition to these deadly drugs, all Kratom research of the past 30 years have shown a unique safety profile for Kratom and its alkaloids: Link https://onlinelibrary.wiley.com/doi/pdfdirect/10.1002/hup.28057

Indeed, scientific research confirmed a 1000times lower mortality risk from Kratom than from all pharmaceutical and illicit opiates that kill 100.000 Americans per year. https://www.sciencedirect.com/science/article/abs/pii/S0091743519303275
According to that Study by Henningfield et al, “Kratom is likely used by 10–16 million people in the US for diverse health reasons.”

So whoever schedules Kratom as a drug would expose millions of victims of the pharmaceutical opiate epidemic to a 1000 times higher risk of mortality = and cause an unseen human tragedy with a dramatic increase in overdose deaths.

The opponents of Kratom quote the “1,807 calls to the CDC regarding kratom from the start of 2011 to the end of 2017, an average of 258 calls per year. To put these number in a relation: during the same period, single-use laundry pods generated 12,157 calls per year. Using annual reports of the American Association of Poison Control Centers, one can easily calculate that antihistamines caused 94,977 annual calls and pain relievers generated 294,812. Again: In comparison there were merely 1,807 calls regarding kratom.

In 2019, the CDC analyzed 27,338 overdose deaths that occurred over an 18-month period. Kratom was detected in 152 (less than 1%) of these deaths, but in most of those cases tests also revealed the presence of drugs known to cause overdoses. Only seven tested positive for kratom alone, and the researchers concluded that “the presence of additional substances cannot be ruled out.”
(end of quote from Statnews)

But after public outrage against the failed attempted Ban of  Kratom in the USA, The FDAs strategy changed to circumvent the expressed will of the American people.  The FDAs vigorously collected documents against Kratom, incl of the flawed collection of side effects and overblown death numbers …made their way magically to the WHO.